Today's the day for a dual cover reveal: OF SCIONS AND MEN by Courtney Sloan and GYRE by Jessica Gunn! Both books are in the New Adult category and are being published by Curiosity Quills Press.
Here's a bit about each book:
OF SCIONS AND MEN by Courtney Sloan (February 22nd, 2016)
Geopolitical babysitting while arresting preternatural killers, it’s just the daily grind for Scion Rowan Brady. Brash and sarcastic, Rowan has sold her life, her career and her very blood to the controlling paranormal ruling class of America, all to make sure her kid brother can eat. Now she uses her powers as a scion to kick the ass of any preternatural creature idiotic enough to break the rules and prey upon humanity without a license. All it costs her is her freedom and a pint or two per week to her new Master.
But juggling her job and duties becomes even tougher when she is tasked with keeping a contingency of diplomats from Canada from getting gnawed on. However, negotiations for an International Blood Exchange are interrupted when bodies start showing up. Now Rowan must rely on her talent and wit to defend the society she despises to save the lives she’s sworn to protect. But as she stumbles into the truth, she chances becoming a target of not only these killers, but of her own government. With shifters, ghosts, vampires and psychics all watching her, can she stop the killings before she is silenced?

ADD OF SCIONS AND MEN TO GOODREADS HERE
***
GYRE by Jessica Gunn (February 1st, 2016)
Trevor couldn’t believe his eyes when Chelsea teleported onto SeaSatellite5. The miracle is Trevor’s absolute worst nightmare. Chelsea is Atlantean, which would be fine if Trevor’s family weren’t Lemurian—enemies of Atlantis. Then SeaSatellite5 uncovers Atlantean ruins and stumbles into the crosshairs of an ancient war. The Lemurians want the artifacts inside the ruins, and Trevor’s the only one onboard who recognizes the relics for what they really are: Link Pieces, tools used by ancient civilizations to wage their time-travel war. Chelsea and Trevor must brave the gyre of lies surrounding them. If they can’t, Atlantis will be destroyed forever. 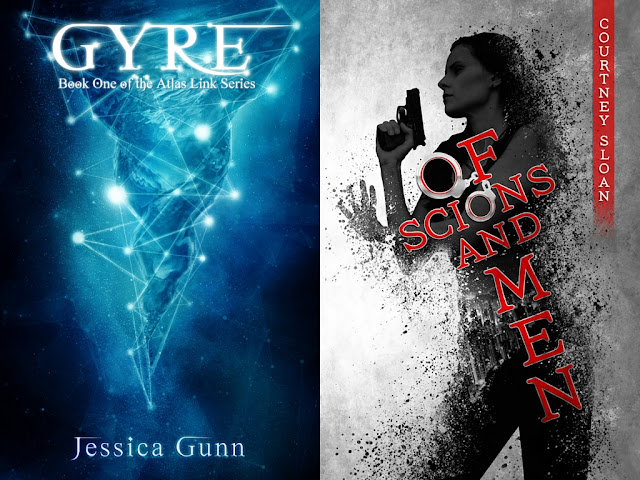 A New Orleans native, Courtney Sloan relocated to the hills of Central Maryland after Hurricane Katrina. There she lives with her husband and fellow author, J.P. Sloan, their son and their crazy German Shepherd pup. Adding to her writing life, Courtney is also a professor at the local college and enjoys learning a world of new ideas from her students as she teaches them about writing and communicating. Courtney’s New Orleans upbringing has left her with a love for the macabre and a flare for the next to normal. She writes speculative fiction with a variety of horror and sass mixed in for flavor.
She loves taking the world of politics that haunts us now, and adding the supernatural to create a gumbo of thrills to keep you up at night. A self-proclaimed lover of way too many fandoms, Courtney also loves crafting. From blankets to jams to stories, it’s always better homemade.

Jessica Gunn is a New Adult author and avid science-fiction and fantasy fan. Her favorite stories are those that transport the reader to other, more exciting worlds. When not working or writing, she can be found binge-watching Firefly and Stargate, or feeding her fascination of the ancient world’s many mysteries. Jessica also holds a degree in Anthropology.
Author Links: Twitter | Facebook | Instagram | Goodreads | Website
Posted by HiddenWorldsBooks at 03:30

Email ThisBlogThis!Share to TwitterShare to FacebookShare to Pinterest
Labels: courtney sloan, coverreveal, gyre, jessica gunn, of scions and men, we read ya