#AmReading: The Rule of 3 by Eric Walters 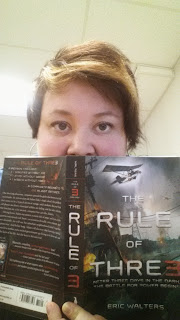 I've started this review off backwards...with a photo before the review. Why? Because that's what this book is all about: how backwards polite society can become with the downfall of technology.
In the 90's we were all concerned about Y2K. What would happen when the clocks clicked from 11:59pm to 12:00am January 1, 2000? Would the computers stop working? Would society fall? I pictured people climbing rooftops with their cult-cocktails and signs for end of the world. When the time came, what happened you ask? Nothing. Life went on. The world went on. Obviously -- most of you were born (possibly a result of too much Y2K cuddling between your parents).
Then the year 2000 came. We worried in that decade about PANDEMICS. There was the avian flu, SARS, and swine flue (aka H1N1), to name just a few. People wore medical masks in public. Health workers could get infected and die. People died. Panic spread like wildfire. It was Y2K all over again, but instead of computers, we were afraid of each other.
The last 5 years have been overtaken by ZOMBIES. Definitely a concern if you live near a cemetery, or any overpopulated city. Perhaps this was a carry over of our pandemic concerns. Personally, this is one of my favourites.
So what do these have to do with Eric Walters's novel "The Rule of 3"? Simply put, it's the next sensation: SURVIVALISM. Everything is gone: cell phones, computers, electricity, internet (yikes I hear teens screaming all over the country). What was it? A solar flare? Warfare? Aliens? Most likely the first, but you don't actually get to find out in Book 1. Instead you get informed on awesome survival ideas, like the first steps to take to protect your neighbourhood, how important it is to stock up on chlorine (I will have to remember to raid my mother's hot tub stash), and how to manage an unruly group of dissidents.
Though this novel is written for young adults, I thoroughly enjoyed it, and feel it is even appropriate for middle grade. It's the kind of novel a reluctant reader would enjoy, with it's fast paced descriptions and smooth flowing scenes. The end of the book even provides us with important items to keep in a bag for emergencies, as well as a list of school discussion questions. Oh, if I was a teacher I would have so much fun with this as a book project!
I enjoyed reading "The Rule of 3" and would recommend it to anyone as an excellent starter novel to learn about how to prepare for a global emergency.
Over and out. -- Melanie
Posted by HiddenWorldsBooks at 21:47 No comments:

Raaaven. I can still hear Cole calling out to the protagonist, Raven, with his flirty mock, even thought I finished reading the book, "Empty Cup" late last night. He's a best friend of Raven's since childhood, and in the end he wins my heart.
Suzanne Costigan's novel, "Empty Cup" is a story about a young girl in grade twelve who goes through a number of difficult struggles. For fiction, topics like rape, abuse, and drugs aren't always easy to write about in an appropriate way for a teen market, but Costigan does it well. I read chapter one on Amazon, and had to immediately order the book. I couldn't wait to see what happened next. The novel arrived yesterday, late afternoon, and I couldn't put it down. Each chapter pulled me along, not because I was tricked with dramatic plot, but rather because I was constantly rooting for Raven.
I'm impressed by Canadian Authors who can use our northern locations for settings in their fiction, and still keep the writing mainstream. Costigan does a great job with this, making "Empty Cup" a novel easily read by a wide market. Though the subject matter is challenging, the novel isn't dragged down with it. Instead, its focus aims at Raven herself, and how her choices, though not always good ones, don't have to affect her future.
I look forward to reading more from Suzanne Costigan in the future. 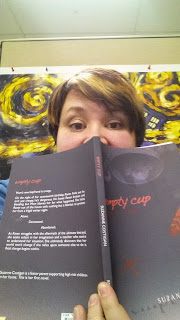 When I decided to take writing seriously over one year ago I had no idea where to start. I had a completed manuscript (rough draft), and idea for a new book, and a deep desire to get published.
I didn't know where to go from there, so I did what most new writers do, and sought out other writer's to give me advise. The only thing was how did I find other writer's in my community? Moose Jaw had a great reputation for producing writers, but there wasn't a public directory to look them up and reach out to them. So I did the best thing I could think of...I joined the Sask Writer's Guild.
But where did I go from there? The next workshop available wasn't until May, and this was February 2014. So went online, like most other tech-savvy 30-somethings like me, and I googled it. The advice out there on the big bad inter-web was o-v-e-r-w-h-e-l-m-i-n-g. And yes, just as irritating as it is to read the world spelled out. There was so much information, I found myself back at the beginning with the question: Where do I start?
So I began to develop my writer's platform, which every agent and publisher talked about. Being a Facebook user, I easily developed my author page. From there I joined Twitter, which practically took me the entire year to understand its purpose, but purpose it does have. I found that the local market in Saskatchewan loved Facebook, and the further away one got (into the larger centers and beyond, used Twitter). A combination of the two was a great idea. Some sites mentioned blogs, but I still had no idea how start one of those, so instead, I aimed at creating my
The year continued with me taking classes on writing, hiring editors to help me with my manuscript, and even completing two new projects, one of which was accepted for publication by Month9Books (Fall 2016). I joined an established writing group, and started one of my own. I reached out to other authors and didn't try to sell my manuscript to them or ask for help, but asked for their advice as a writer in Saskatchewan (workshops, retreats, etc.). I learned and grew as a writer in 2014, and have continued that into 2015 where I signed up for the University of Calgary's Creative Writing Certificate and scheduled more writing workshops, retreats, and conferences for the upcoming year.
I don't let anything stop me from getting better, because no matter how good my idea is, if I can't communicate it the right way to the right people, it's not going to get anywhere.
So what's my advice in a nutshell?
1. Finish your manuscript. No one can help you do this except yourself.
2. Always write. I make myself write every day, whether its 15 minutes or 3+ hours. There's no excuses: I have 2 young children in activities,a full-time job in the business industry, and I still make time to write. I carry a notebook that I scribble in, I go on the computer and add paragraphs or pages to works-in-progress. I have 15 manuscripts on the go at any one time, simply due to a lack of time to get them completed. I am always writing.
3. If you hit a block, join a writing group. Heck, don't wait for a writer's block, just go find a group and join it. Don't have one in your area? Start one. When I started Moose Jaw Night Writers it was just an idea. So I reached out to a member of another writing group in Moose Jaw and told her I wanted to start an evening group (because theirs was in the morning during the work week). Now, only 8 months in, our numbers have almost quadrupled. But even if there's only 2 of you, its a great idea to have someone who's not your parent or spouse to provide feedback. Plus, I've got a lot of great ideas from our 10 minute free write we do at the beginning of every meeting.
4. Join your local writer's guild. I hear from lots of people that they don't see much value in this. I find they are talking financial value - and if you look at writing in a measure of financial value you will be disappointed. Join the guild to get access to higher levels of workshops, a wider community of writers, and information on programming, contests, and publication. I have never been disappointed in my membership and will continue to renew it every year.
5. Reach out to other writers. Not so they can tell you if your manuscript or book idea is good or bad - that's not their job and trust me they are busy enough writing their own stuff and working in their writing group. Reach out to them for tips on what they've learned over the years. The "Do's" and "Do Not's." Trust me, little tips are valuable.
I know what's it like to be a new writer. It's overwhelming, and if you're like me you want to tell everyone about your book ideas, and you talk until their eyes glaze over. Fear not, you will settle in your career as a write, and as time passes you will get better. Never stop writing.


Posted by HiddenWorldsBooks at 14:23 No comments: