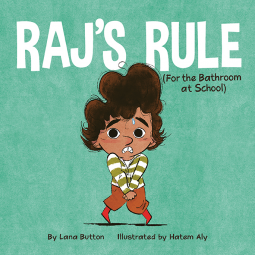 Raj has one rule: he never uses the bathroom at school. It’s just not the same as the one at home. All day, he avoids bathroom trips. Easy enough, since he lives by these tips: Don’t linger at the sink. Stay away from anyone who makes you laugh. Watch out for distractions, especially schoolwork. And sit still: no running, jumping, cartwheels, or sneezing. Until one day—achoo!—Raj has to break his own rule.After he faces his fear and uses the bathroom at school, Raj feels different. He doesn’t have to rush! He can try new things, laugh, explore … even enjoy his work. He can stay awhile and play. Raj discovers things are better if you just go when you need to.Told in speech bubbles with bright, lively art showing a diverse group of kids, this is a riotous rhyming read-aloud with an empathetic take on facing a common fear. 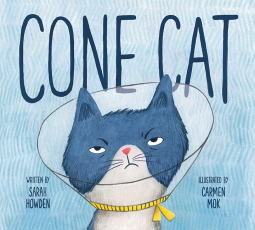 One day, Jeremy wakes up at the vet’s with a giant cone around his head. In a momentary existential crisis, he resigns himself to his new role as clumsy, smelly Cone Cat. That is, until the cone becomes instrumental in lapping up the last few bites of cereal on the breakfast table.Surprisingly, Cone Cat can do a lot of things old Jeremy couldn’t. He can hunt spiders with ease, collect stuffing from the couch, and disguise himself as a bowl to steal a scoop of ice cream at a birthday party. When the cone is removed the next day, Jeremy starts to miss it. Will he ever get another chance to indulge in the tricks he pulled off as Cone Cat? It doesn’t take him too long to find out …With lively illustrations and plenty of wit, this hilarious picture book about adapting to seemingly im-paw-ssible situations is sure to please kids and cat-lovers alike.
Posted by HiddenWorldsBooks at 07:00