Rock stars are just something out of a romance novel, right?

Gabby knew Nate was hiding something-

she just never expected it to be that he was a rock star... 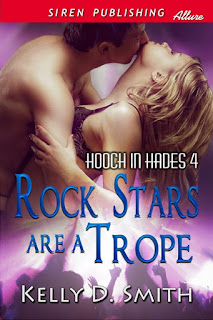 Gabby Denis, a struggling fashion designer, is not stupid. There is something off about Nate Cooper. She just doesn’t know what it is. Not many men are willing to take a girl out shopping and pay for her new clothes. She’s also never been out with a man who seems to have women recognize him. Or one with friends that need a formal dress made. Of course, she doesn’t turn down the chance to make it!

Gabby likes Nate for who he is, not because he lends her a car and pays for some of her things. For the first time in ages, she meets someone who supports her, and she genuinely enjoys his company. But he never tells her what he does for a living...until she sees him on the front page of the news.

Although, for Gabby, rock stars are a trope from movies and romance novels, she's going to have to decide if she's willing to give a real life one a shot at loving.

“How’s work?” she asked, trying not to give away that she was prying.
“It’s been slow, but that’s not always a bad thing.” He eyed her carefully.
The elevator dinged, and the doors opened. Both Gabby and Nate stepped off the elevator and fell into pace together, but she made sure that he was leading the way because she had not fucking clue where she was going.
It didn’t take long to get to a door that Nate unlocked and opened. He set Gabby’s suitcase down by the window.
“Wow.”
Gabby stared out the window, her eyes widening at the scene in front of her. The lights lit up enough for her to see almost everything, but the dark made it prettier. I can’t believe I’m in England.
“Why did you do this?”
“What?”
“Why did you do this for me?” Gabby turned to look at him, waiting for an answer.
“I didn’t do it for you.”
Her heart dropped. Gabby stared at him, trying not to show her hurt.
“The truth is I missed you. I wanted to see you. I wanted to make an impression and give you a reason to want to see me again.”
Gabby was left speechless for a couple of seconds. “You really think I don’t have my own reasons for wanting to see you again? I promise you. Me wanting to see you again has nothing to do with you flying me here, as much as it means to me. I want to see you again because I miss you.”
He stared at her, slightly taken aback based on the look that crossed his face. He looked away quickly.
“Thank you.”
He said it so softly she hardly heard it. Gabby crossed over to him and touched his back softly. He stepped toward her, still facing away from her. Gabby didn’t say anything. She just stood there, her hand against his back. She tried to figure out if she should say something or not, but she couldn’t think of anything worth saying, so she just kept her trap shut. A few seconds passed but not long until Nate turned and gave her a smile.
“I’ve got to admit I don’t have a lot of time to hang out with you, but I figured I could at least bring you out here, and we could spend some time together, and then Paige and Kenda would love to hang out, I’m sure. If you don’t mind hanging out with them.”
“No, not at all.” It wasn’t quite a lie. She wanted to hang out with Paige and Kenda. She was just nervous to do it. From what she could tell, Paige and Kenda were best friends. Although Paige had been really nice to her when it was just the two of them, she wasn’t sure she would be with a friend around.
Don’t worry so much. Paige doesn’t seem like that kinda girl.
Trying to shove the thought out of her mind she padded over to the bed and sat.
“Does that mean I won’t get to spend much time with you?”
“Sorry, but no. I’ve got a lot of work to get done.”
Gabby bit her lower lip. She nodded, not liking his answer but understanding it.
“I’d try to get out of it, but I know I can’t.”
“No, I don’t want you to put off work because of me. I don’t want to be that kind of girl.”
A smirk spread over his lips. “See this is one of the reasons I love you.”
His words shocked her. Gabby snapped her head up, and she stared at him with wide eyes. Had she just heard that right?
Nate’s eyes were wide as he stared at her. “I mean…” He struggled to find words, looking scared.
“I know. I mean you don’t mean you love me.” She cut him off. Of course he didn’t love her. “That’s way too soon.”
“Yes. Yes, right. Still too early for love. I just meant—”
“I know.”
“Yes. Good.”
Nate ran his fingers through his hair with a sigh. He refused to meet her gaze. She wasn’t sure what to say next. Just play it cool. Pretend it didn’t even happen. She cleared her throat.
“So, you’re not going to take me sightseeing.”
“Sorry, no. I can get the girls to, though, if you’d like.”
“I’d love that.” Maybe a little girl time would be good for her.

Kelly D. Smith is a 21 year old romance writer from Canada. After being homeschooled all her life she got her GED and has been pursuing her passion- writing- with the hopes of turning it into a full time career.

Smith is a personal improvement junky and loves excelling at challenges. She is a country girl at heart and loves spending the day outside with her 3 dogs and the cat!
Posted by HiddenWorldsBooks at 17:12