How I Got my Agent: Dee Garretson PLUS #GIVEAWAY!! 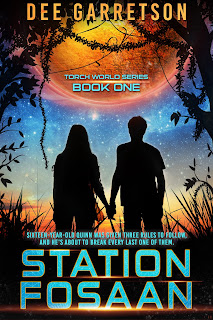 Scientists and their families stationed on the remote planet of Fosaan were promised a tropical vacation-like experience. But Fosaan, devastated from an apocalyptic event nearly three-hundred years ago, is full of lethal predators and dangerous terrain.

Earthers are forbidden to go beyond the safety zone of their settlement and must not engage the remaining reclusive Fosaanians, native to the planet. Sixteen-year-old Quinn Neen is about to do both of those things.

During an unsanctioned exploration of the planet, Quinn discovers a beautiful Fosaanian girl named Mira stealing food from his family’s living unit. But before he can convince her to show him around, scientists are taken captive, leaving Quinn and the other young Earthers at the mercy of space raiders.

Quinn must go from renegade to leader and convince Mira to become an ally in a fight against an enemy whose very existence threatens their lives and the future of Earthers stuck on Fosaan and at home.

STATION FOSAAN is THE MYSTERIOUS ISLAND meets STAR TREK: THE WRATH OF KHAN.

How I got my publishing deal...

Hi Melanie,
Thanks so much for hosting me on your blog.

The agent question is always a hard one for me to answer because as in all things publishing, it’s complicated!

I got my first agent in a very traditional way, a cold query after many years of writing and querying, and with a manuscript that was not my first book. I’m a slow learner. It took me a long time to learn to write well enough to have something good enough to put out there. That agent sold my first two books. I wanted to write a science fiction story next, the one that eventually became STATION FOSAAN. The agent wasn’t interested in representing science fiction at the time, and because of that and some additional factors, we decided it was best to ‘part ways’ in publishing speak.  I went ahead and wrote an early version of the story as a middle grade.

I signed with my next agent because another writer who was repped by her recommended me. She submitted the middle grade version of STATION FOSAAN to a few places, but the editors’ comments were that it was bordering on YA, and some aspects were too violent for middle grade. Before I could rewrite it, the agent left the business. I did rewrite it as YA and ended up submitting it myself to Month9 before I found my current agent. To find her, I cold queried with another middle grade manuscript which is now under submission. So I guess if there is a moral of my story it is to be flexible, and as many people say, remember publishing is a marathon, not a sprint! STATION FOSAAN is being published seven years after I started the first chapter.

Dee Garretson writes for many different age groups, from chapter books to middle grade to young adult to adult fiction. She lives in Ohio with her family, and in true writer fashion, has cat companions who oversee her daily word count. When she’s not writing, she loves to travel, watch old movies, and attempt various kinds of drawing, painting and other artistic pursuits.

Giveaway Details:
(1) winner will receive a Perfectly Posh, Posh To Meet You Set ($20 value), US Only.