On today's Friday Fandom I have the snarky and charming Stephanie Wardrop! 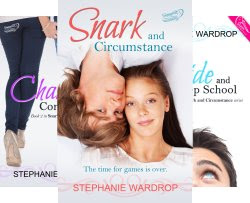 I have a series (SNARK AND CIRCUMSTANCE) - 4 enovellas that make up what I think of as 1 book (snark and circumstance, charm and consequence, pride and prep school, prom and prejudice), and a book-length sequel called SNARK AND STAGE FRIGHT. The first (the 4 enovellas) are based on Pride and Prejudice - snarky vegan girl meets preppy stuffy boy and they clash. (that's probably way more than 140 characters)

Hidden Worlds Books: You're forgiven. You do have 4 e-novella's to explain!

2. What would be the theme song for your book (s)?

The first book (the 4 novellas) ends with the theme of Jason Mraz's "I'm Yours" because it fits AND he's a cute vegan :).

The S&SF's theme would be P!nk's "True Love"

3. What is your favorite "book" movie and why?

You mean a movie from a book? Well, I love the BBC version of Pride and Prejudice from the 1990s. That almost goes without saying :) And I think the film version of Markus Zuzak's The Book Thief was underrated. I thought the actress playing Leisl was great and they did as good a job as they could do without the thing that makes the book so remarkable - the narration through the character of Death.

4. What are you currently writing?

A book set in the 1970s about the daughter of a Sylvia Plath-like suicide who has to learn how to live with her mother's legacy and find her way out of depression. So, yeah, it's a real laugh riot.

Hidden Worlds Books: This sounds amazing. I'd like to see a trend of mental health issues directly presented in YA.

I am reading Angela Davis's autobiography. I like to read all sorts of things, especially history, though.


Thanks for coming out, Stephanie. Your series sound wonderful and I can't wait to read more! 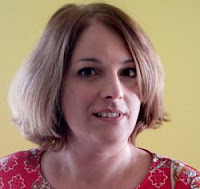 Born in Reading, Pennsylvania, a town known to most people only from the Monopoly game, Stephanie Wardrop always wanted to be a writer (or a pirate, but piracy seemed like even more of a long shot, career-wise). She loves animals, travel, books and movies, exploring new places, anything that smells like the ocean. She teaches at a university in western New England, where she lives with her husband, two kids, and four cats.