Hi everyone! Today we have Everly Frost, author of FEAR MY MORTALITY!! 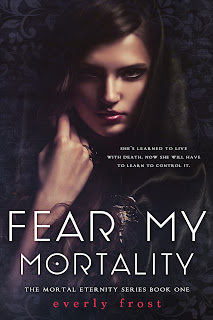 The future is bright for 16-year-old Ava Holland and the residents of Evereach. They don’t have to worry about old age or even getting sick. In their world, humans regenerate, heal, and live for hundreds of years. Mortality isn’t something to fear. Disease has been all but eradicated. Everything changes when Ava watches her brother die and he doesn’t regenerate. Ava’s genetics are called into question by the government, scientists, extremists, and Ava herself. Could her genes hold the answer to mortality? Is she an anomaly or something to be feared? Determined not to become anyone’s guinea pig, Ava doesn’t stick around to find out. She wants answers too, but the only person who can help her is 17-year-old Michael Bradley, the boy who killed her brother. If either of them have even the slightest chance of survival, they must find the genetic keys hidden in Ava’s DNA before it’s too late.

In a world where humans are invincible, one girl suspects she might be mortal after watching her brother die (YA scifi).

2. What would be the theme song for your book?

Fear on Fire by Ruelle, because it’s about courage and love in the face of fear.

3. What is your favorite "book" movie and why?

Jane Eyre – the one with Mia Wasikowska and Michael Fassbender. I love its intensity.

4. What are you currently writing?

I’ve just handed in the sequel to Fear My Mortality and now I’m writing the third (and final) book in the series. Boy there’s a lot to pack into this one!

The Abyss Surrounds Us by Emily Skrutskie.

Thanks for participating Everly!
Can't wait to get our hands on a copy!!

Here's a book trailer to hold the rest of us over until FEAR MY MORTALITY releases:

Everly Frost wrote her first story when she was nine. She grew up in a country town, lived in Japan, and worked for several years in Canberra, Australia’s capital city. Now, Everly lives in Brisbane, Australia, with her husband and two children. She doesn’t speak Japanese so often anymore, has left the cold Canberra winters behind, but has never stopped writing.