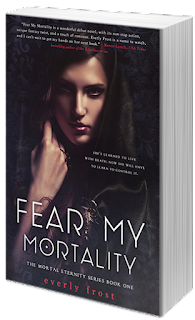 In a world where people are invulnerable to illness and death, with lives spanning hundreds of years, a sixteen-year-old becomes witness to the impossible – her brother’s failure to regenerate after death after which she suspects that she too may be mortal.

Oh, where do I start. I was instantly sucked in from the first paragraph (you can read it on Amazon = no spoilers here). I mean, seriously, a kid gets hit by a car an no one really cares. In fact, even his own mother treats it like an inconvenience -- Uh, hello, son I'm gonna be late for work!

In the land of immortality first death is just a pain in the butt.

From there I was taken on a roller coaster ride of emotions. As Ava preps for her Implosion (a coming of age tradition where your parents *ahem* help you achieve first death) no one empathizes with her discomfort. I seriously felt for her, feeling antsier the closer the event came. And then just when I think things can't get more interesting...wham...what happens at Implosion? Well, I can't tell you, but I will say you'll never see it coming...

Fear My Mortality will keep you at the edge of your seat, with page turning excitement, and twists and turns you never saw coming. Ava is the perfect heroine, both vulnerable and caring, which makes her that much more important. Michael is the golden boy from school, driven by purpose and duty.

A 5 star fantastic YA read, I can't wait to read the sequel!

And don't worry, there's a little bit of romance for those of you interested...

Everly Frost wrote her first story when she was nine. She grew up in a country town, lived for a little while in Japan, and worked for several years in Canberra, Australia's capital city. Now, Everly lives in Brisbane, Australia, with her husband and two children. She doesn't speak Japanese so often anymore, has left the cold Canberra winters behind, but has never stopped writing.