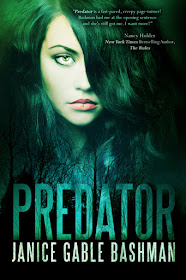 Hello, Janice!
Thank you for joining us today on #FridayFandom!


1. Tell us about your novel PREDATOR in 140 characters or less.

Bree injects herself with an untested version of her dad’s gene therapy to become a werewolf so she can save the world and those she loves.

2. If PREDATOR was made into a movie, who should portray the main characters?

My protagonist Bree Sunderland—Shailene Woodley dominated in her leading role as Tris in the film DIVERGENT. Her character was both tough and sensitive. She’s perfect to play Bree.

Bree’s boyfriend Liam ––Logan Lerman portrayed an endearing and sensitive Charlie in THE PERKS OF BEING A WALLFLOWER and the hero Percy Jackson in PERCY JACKSON: SEA OF MONSTERS. Logan is Liam for sure since he’s able to portray a strong yet caring character. (Liam is into science, he coaches kids, and he’s caring. But he’s tough and strong too.)

Isabella—Isabella is a leader who prefers to work behind the scenes. She’s strong, responsible, and one kick-ass woman when forced to take action. Angelina Jolie is incredible when it comes to portraying a strong woman.

Dr. Sunderland (Bree’s scientist dad)—I’d cast Sam Trammell as Dr. Sunderland. Sam can easily play super smart and caring, traits that define Dr. Sunderland. Bree’s dad is a driven and determined man. His work consumes a lot of his life but for good reason. And he cares for others but doesn’t always know to show it.

3. Bree is a strong female protagonist. Why is that important in your work?

I love a strong female protagonist, someone who stands up for her beliefs no matter what the consequences and is willing to do whatever necessary to protect those she loves. Bree embodies these characteristics. But she’s not only strong. She’s smart, intuitive, and curious. She’s really into science, but she is also a typical teen who falls in love and experiences all the emotions that go along with it. Yet she is also caring and kind. The combination of these characteristic make for a compelling read.

4. What is your favorite "book" movie and why?

I love THE PRINCE OF TIDES and THE FAULT IN OUR STARS. Both movies stay true to the books in that they explore important subjects and feelings on a deep level. They also show that despite all the difficulties we may face in life there is always hope.

THE WALLS AROUND US by Nova Ren Suma. I’m about half-way through it and loving it.
Here’s a short description of the book: “Ori’s dead because of what happened out behind the theater, in the tunnel made out of trees. She’s dead because she got sent to that place upstate, locked up with those monsters. And she got sent there because of me.”

Thank you for joining us Janice!
Predator sounds awesome - here are some details: 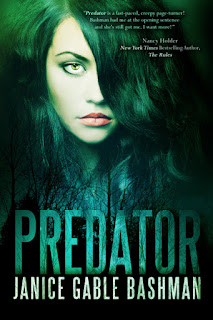 The hunt is on!
Sixteen-year-old Bree Sunderland must inject herself with an untested version of her father’s gene therapy to become a werewolf in order to stop a corrupt group of mercenaries from creating a team of unstoppable lycanthrope soldiers.
When Bree went with her scientist father to Ireland , she thought it would be a vacation to study bog bodies. She never expected to fall in love with a mysterious young Irishman and certainly never expected to become the kind of monster her father said only existed in nightmares. Dr. Sunderland discovers that lycanthropy was not a supernatural curse but rather a genetic mutation. When they return home, her dad continues his research, but the military wants to turn that research into a bio weapons program and rogue soldiers want to steal the research to turn themselves into unstoppable killing machines.
Bree’s boyfriend Liam surprises her with a visit to the United States , but there are darker surprises in store for both of them. As evil forces hunt those she loves, Bree must become an even more dangerous hunter to save them all.
Predator gives the werewolf legend a couple of new spins by introducing the Benandanti (an actual folkloric belief that certain families of Italy and Livonia were werewolves who fought against evil), as well as a modern scientific approach to mutation and the science of transgenics

Praise for PREDATOR:
“Predator is a fast-paced, creepy page-turner! Bashman had me at the opening sentence and she’s still got me. I want more!” —New York TimesBestselling Author Nancy Holder

“Every twist and fascinating revelation fell into place smoothly, with an ending that will leave readers wanting more. With this kind of originality on the page, it is exciting to speculate at the surprises Bashman will unveil next”—Suspense Magazine

“Werewolf fans will howl with delight once they get their paws on this spine-chilling YA novel.”—RT Book Reviews 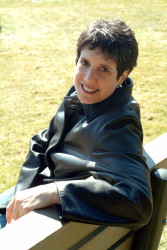 Janice Gable Bashman is the Bram Stoker nominated author of PREDATOR (Month9Books 2014) and WANTED UNDEAD OR ALIVE (w/NEW YORK TIMES bestseller Jonathan Maberry) (Citadel Press 2010). She is publisher of THE BIG THRILL (International Thriller Writers’ magazine).  Her short fiction has been published in various anthologies and magazines. She is a member of the Society of Children’s Book Writers and Illustrators, Mystery Writers of America, Horror Writers Association, and the International Thriller Writers, where she serves on the board of directors as Vice President, Technology.
You can visit her website here.
HiddenWorldsBooks at 23:27
Share